Update (October 10, 2019): The man responsible for fatally shooting 28-year-old Markeis McGlockton in front of a Florida convenience store in July 2018 has been sentenced to 20 years in prison.

CNN reported 49-year-old Michael Drejka was sentenced on Thursday, Oct. 10 after being convicted of manslaughter in the death of McGlockton over a handicapped-accessible parking spot. 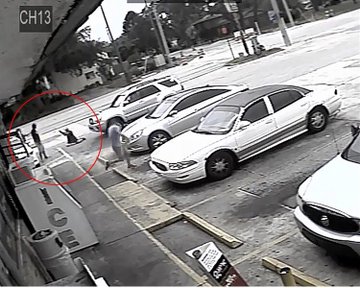 “Now we can start putting the pieces back together and move on,” he said.

According to NBC News, the victim’s family addressed the 28-year-old’s killer.

“I know in the Bible, it talks about in order to get into heaven, you have to forgive,” McGlockton said to Drejka during the sentencing. “At this part in my life I’m not there yet, and if the Lord chooses to take me before I come to terms with this, then I will see you in hell where you and I will finish this. Mark my words.”

McGlockton’s mother, Monica Moore-Robinson, echoed similar sentiments saying, “I don’t hate you, but I will never forgive you.”

Drejka’s defense team reportedly asked for the Florida man to be released on probation or receive less time in prison. Circuit Judge Joseph Bulone denied their requests saying Drejka was a “wannabe law enforcement officer” who recklessly monitored a parking spot at the Clearwater convenience store where McGlockton was killed.

According to Bulone, the store’s owner requested for Drejka to stop stalking the parking space.

McGlockton’s girlfriend, Britany Jacobs, who was confronted by Drejka just minutes before the fatal shooting, testified during the sentencing. “My world will never be whole again,” she told the court. “How could one person’s anger about a parking spot lead to the person I love dying?”

At the time of McGlockton’s death, Jacobs was pregnant with their fourth child.

CNN reports a jury deliberated for six hours Friday night to determine if the state’s “Stand Your Ground” law was an applicable defense for Drejka. Ultimately, they decided it was not.

The victim, Markeis McGlockton, was shot dead at a convenience store in Clearwater, Florida, on July 19, 2018, after a confrontation with Drejka. The 49-year-old gunman shot McGlockton because McGlockton and his girlfriend parked in a handicap space Drejka claimed for himself.

It took weeks for Drejka to be arrested because he claimed self-defense and evoked Florida’s controversial “Stand Your Ground” law. He wasn’t arrested until the state attorney intervened.

“In any case where a defendant raises self-defense as an affirmative defense, we have to disprove that defense beyond a reasonable doubt, and I made the determination that we can do that,” McCabe said.