The city is moving forward with a feasibility study to plan and improve pedestrian and bicycle infrastructure and 1.4-mile connectivity trails linking the commercial corridors between Campbellton Road and Cascade Heights.

“District 11 will be a transformative community where the power of connectivity through the creation of safer pedestrian and bicycle infrastructure will promote vibrant, thriving communities,” Overstreet said. “This initiative will begin the process of connecting the city of Atlanta to surrounding cities and the world’s busiest airport by way of greenway.  It is vital that we support this feasibility study by working collectively as key stakeholders to improve our district.” 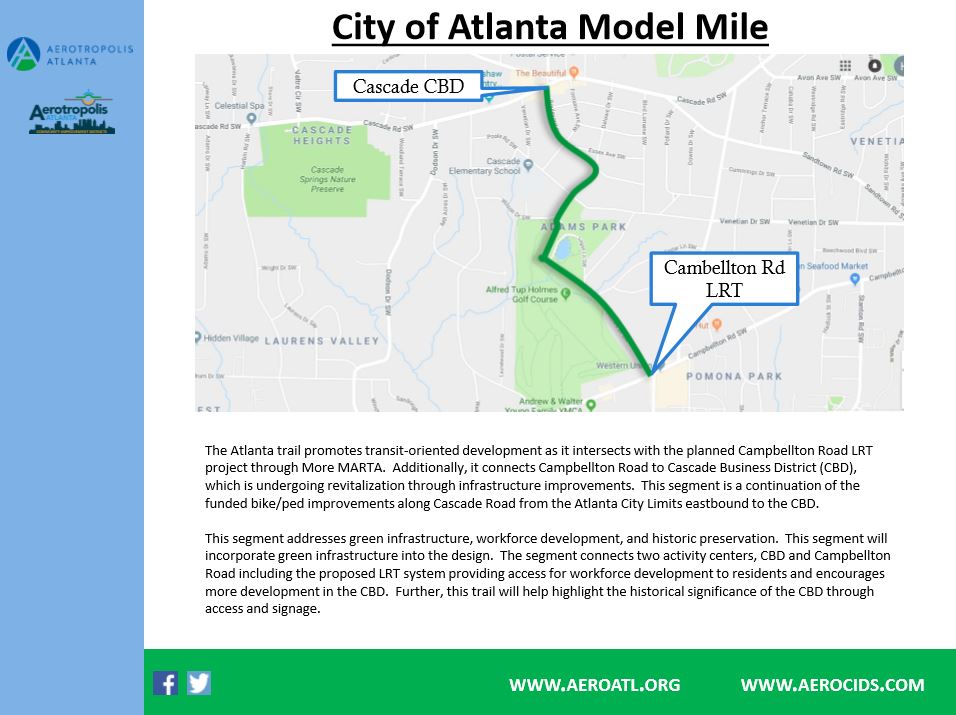 The study will integrate previous plans and initiatives and incorporate the current needs and opportunities identified by local representatives of the cities and counties participating, key stakeholders and the public. The study area for the Greenway Development Plan includes Hartsfield-Jackson Atlanta International Airport, and the surrounding jurisdictions of Atlanta, Hapeville, East Point, Forest Park, Union City and Clayton County.

“The AeroATL Greenway Plan provides a visionary framework for trail connectivity across the Aerotropolis region. Building from the Blueprint Plan, this study represents an approach to connecting the Aerotropolis communities with an integrated, comprehensive bike/pedestrian trail system that provides access between job centers, everyday services, and the region’s cultural and natural assets,” said Gerald McDowell, executive director of Aerotropolis Atlanta CIDs. “This value-add is a win-win for all and continues to support our commitment to creating an economically strong, safe, attractive and vibrant community surrounding the world’s most-traveled passenger airport.”

In 2018, the City Council adopted Atlanta’s Transportation Plan, which promotes the improvement of health, safety and security for all users of the transportation system. The plan states that the south, southwest and western sides of the city of Atlanta have the lowest coverage of sidewalks and that high-quality sidewalks and bike infrastructure are important to facilitate access to transportation, retail, and the community.

Atlanta’s Transportation Plan also identified a High Injury Network (HIN) that includes streets where most fatal crashes occur because of a high concentration of vulnerable street users doing activities such as walking and bicycling.

The City of Atlanta Procurement Department will oversee the requests for proposals from outside agencies to support efforts of conducting the feasibility study.