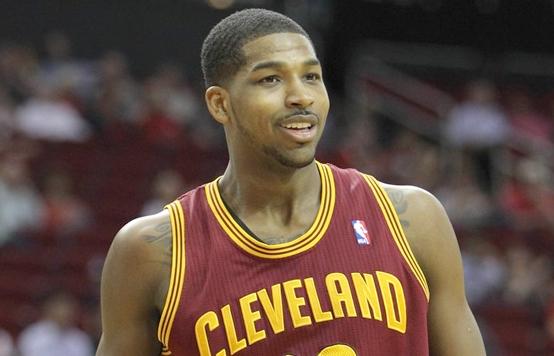 Cleveland Cavaliers big man Tristan Thompson is being excoriated by some in the media for stepping over the line as far as they’re concerned.
So what did he do top deserve the rancor? He kissed his interviewer!
It happened after the Cavaliers’ game against the Dallas Mavericks Friday night. Thompson, who been moved back to the power forward position from center, was being interviewed by FOX Sports sideline reporter Allie Clifton. Right as the interview concluded, he gave he a smooch.

As we said, some in the media are painting Thompson’s little peck on Clifton (in the area of her ear/hair) as sexual harassment. Here’s what Kelly Dyer of Yahoo’s “Ball Don’t Lie” blog wrote:

Just because Allie Clifton remained calm and professional and kept a smile following the buss, it doesn’t mean Tristan Thompson wasn’t straight up sexually harassing her. She remained calm and professional because she is a professional – that is to say, she’s doing her [EXPLETIVE DELETED] job. Don’t kiss someone without their consent, ever, and don’t kiss someone without their consent while they’re doing their job.
This isn’t cute or funny or meme-worthy. There should be no marginalizing or rationalizing of this. That could be a mortifying thing for this reporter, and Thompson couldn’t be more in the wrong. Just because you’re working with someone of the opposite sex, it doesn’t mean a sly innuendo, pat on the rear, or kiss on national television is in any way appropriate. You want to lay your uneasy flirt game on someone? Wait two hours and take it to a bar. Grow up.
The Cavaliers and the NBA shouldn’t slough this off as a preseason giggle-fest.

Spencer Lund of Dime Magazine was also mortified by Thompson’s peck on the cheek of Clifton. He’s calling for help from Lance Stephenson and a fine from the NBA, too

We hope Lance Stephenson blows in Thompson’s ear and kisses him on the side of his head when he’s trying to do his job. We hope the NBA acts to fine or suspend Thompson even though it’s a preseason game and Clifton handled it like the pro. That’s because she is a pro. The kiss was workplace harassment pure and simple, so hopefully the NBA takes a firm stand next week, so we never have to witness something like this again.

No, it wasn’t politically correct, but was it that big of deal? Are these writers correct in their assessment? What say ye
Read more at https://www.eurweb.com/2014/10/cavaliers-thompson-kisses-sideline-reporter-all-hell-breaks-loose-watch/#XFaJhpx5UROrrYUw.99