In the opening scene for the third season of “All Rise,” we believe Lola Carmichael (played by Simone Missick) has lost her election and her seat as a judge only to reveal that she actually won.

The series initially had a similar fate, canceled by CBS to later be picked up and renewed by OWN (The Oprah Winfrey Network). In an exclusive interview with the LA Sentinel, Simone Missick shares the importance of using her voice as an executive producer to create an inspiring and culturally relevant narrative.

L.A. Sentinel: In addition to starring in the show, it’s exciting to also see you credited as an executive producer. Can you share what that role entails?

Simone Missick: I came into season three knowing I wanted to be an executive producer. I have three fellow co-producers, Denitria Harris-Lawrence who is our showrunner as well as Michael Robin and Len Goldstein who have been with the show since the beginning. I was stepping into this [role] knowing that I was going to be partnered with people that I trusted creatively and professionally to tell impactful stories while also being timely and culturally relevant.

As an executive producer, there’s a level of joy I have going to work everyday being the lead on the show and then being able to help to tell it in a stronger, more culturally specific way. [For example] I said Lola has to go to Howard University. She was supposed to have gone a school in California for undergrad and I said, ‘Oh no! She had to have gone to Howard.’

Those things are important. I remember growing up and watching “The Cosby Show” and seeing all those [college] sweatshirts that Cliff Huxtable wore and asking, ‘Where’s that school?’ As an HBCU (Historically Black Colleges & Universities) alumna, I know how important those images are for young Black students and it was important for me to share that with the “All Rise” audience.

LAS: Having watched several episodes from season 3, it seems as if some of the storylines are inspired by current events. Can you share what type of cases we can expect this season and how Lola will navigate these issues in her courtroom?

SM: The show tries to illuminate that people are in charge of our criminal justice system and yes we have written laws but those laws are manipulated, changed and stretched to fit whatever narrative that a person may have consciously or subconsciously about an individual or a group of people.

This season we’ll see how difficult it is to get a wrongfully convicted man exonerated. Then we find ourselves dealing with a serial killer that’s been targeting black women in Los Angeles for decades. 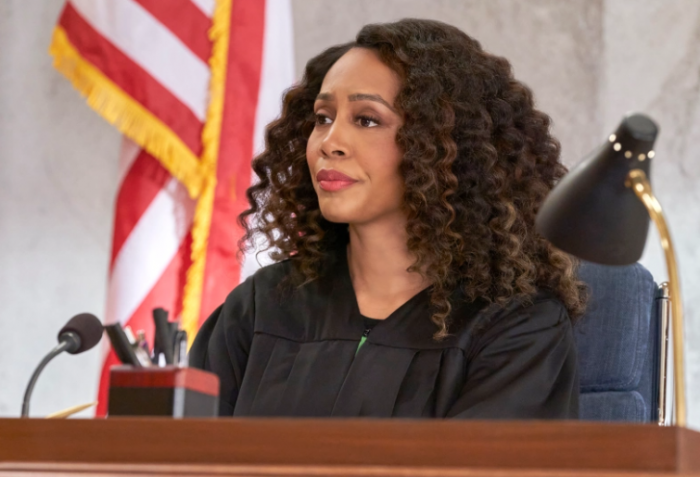 Simone Missick as Judge Lola Carmichael in ‘All Rise,’ (Warner Bros. Entertainment Inc./ Courtesy of OWN)

Another episode that I’m really excited about is whether teaching Black History should be allowed in schools. There’s a moment when one of our characters can’t understand how this debate is happening in California. They say, ‘I know it’s happening down south, I know it’s happening in the midwest, but in Los Angeles?’ and Lola’s response to that is very much in line with my [own] awareness of where we are as a nation and the need for people in power to hold on to that power by trying to shape a narrative about the history of this country.

Those are just some of the examples of the cases we have coming up. Some of which, as you said are “ripped from the headlines” while some have been a part of the criminal justice system forever. I think [“All Rise”] does it in a way that feels fresh and exciting for our audiences while also asking them to question their own biases and their own judgements of who’s guilty, who isn’t, who deserves rehabilitation and who doesn’t. Who deserves a second chance and who’s irreparably damaged and thus needs to be put away for life.

LAS: Can you share advice for fellow creatives who may feel as if they’ve been hard at work for years but have yet to experience their big break? How do you remain resilient during the toughest times?

SM: I thank God for my husband who’s my prayer partner, my biggest supporter and someone who’s also in the industry so he understands the highs and lows. He’s encouraged me for years before it happened. I also have a strong prayer group of women, we study the word together, we lift each other up in prayer for auditions and meetings and also encourage one another because there are peaks and valleys.

As artists we have these ideas of the way it should go but for me, I thank God for every “no” that I ever received that led me to “Luke Cage” because they weren’t looking for somebody who we had seen everywhere. It had to be me, one, because that’s how I believe God works but it also had to be me who literally had done only three jobs up until that point–three IMDb credits. I had done plays, commercials and short films but in the eyes of the industry, I was a ‘nobody’ but in God’s eyes, He knew exactly where I was supposed to be.

For people who feel as though it’s never going to happen, if you truly love what you do and believe that’s what God has placed you here to do on this earth, never give up. Make whatever you can happen on your own so that when those opportunities come, you’re ready. Be good at your craft, sharpen your skills and never give up on yourself. Those are the things that will continue to propel you forward.

All Rise airs Tuesdays at 8p/7pc only on OWN.