Cosby, 80, was accused of drugging and attacking Andrea Constand. He now faces 30 years in prison.

Beloved comedian and once America’s favorite dad, Bill Cosby has been found guilty of all charges in a sexual-assault trial  after 14 hours of deliberations.
Cosby was convicted of three counts of aggravated indecent assault for drugging and sexually assaulting Andrea Constand at his Elkins Park, Pennsylvania home in January 2004.
In what seemed to be a never ending saga of Hollywood starlets and aspiring entertainers, the Cosby case was the first in a long line of charges leveled against Hollywood heavyweights and helped launch the #MeTooMovement. Cosby’s first trial ended in a deadlock last year and the retrial began this year on April 9. Cosby is accused of sexually assaulting more than 60 women over the past 40 years, including Constand, but hers has been the only case to date against the groundbreaking comic to see the inside of a courtroom.
Onlookers present in the courtroom report that both Constand’s and Cosby’s testimonies were more detailed and more graphic, although their statements  mirrored each other.  The details of her civil suit settlement with Cosby in late 2006, in which she got $3.38 million, were part of the record for the first time.
The guilty verdict in Bill Cosby’s drugging and molesting criminal trial on Thursday means the 80-year-old comedian is facing some serious prison time. Cosby was convicted on all three counts of aggravated indecent assault for drugging defendant Andrea Constand before he sexually assaulted her at his suburban Philadelphia home in 2004, according to multiple media reports. 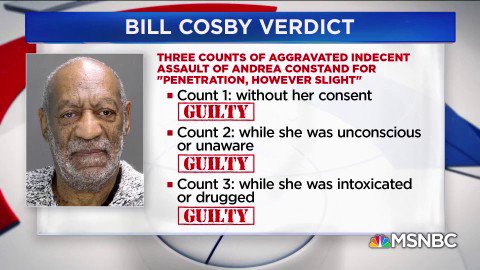 Cosby’s legal team was expected to appeal the verdict in the comedian’s retrial following a hung jury last year. He was not expected to report to prison immediately, but faces 10 years for each of the three counts he was found guilty on. The sentences could run concurrently, but that was expected to be determined at a later date.

Prosecutors asked the judge to remand Cosby to prison and said he was a flight risk, but he remained free on his $1 million bail that he previously paid.
If he were to be sentenced to the full 30 years, he would most likely die in prison.
This is a breaking news story and will be updated.