MONROEVILLE, Pa. (AP) — Even doctors can be addicted to opioids, in a way: It’s hard to stop prescribing them.
Melissa Jones is on a mission to break doctors of their habit, and in the process try to turn the tide of the painkiller epidemic that has engulfed 2 million Americans.
It was in doctors’ offices where the epidemic began, and it’s in doctors’ offices where it must be fought. So Jones is using some of the same tactics pharmaceutical sales forces used to push their potent pills into communities — this time, to get them out. 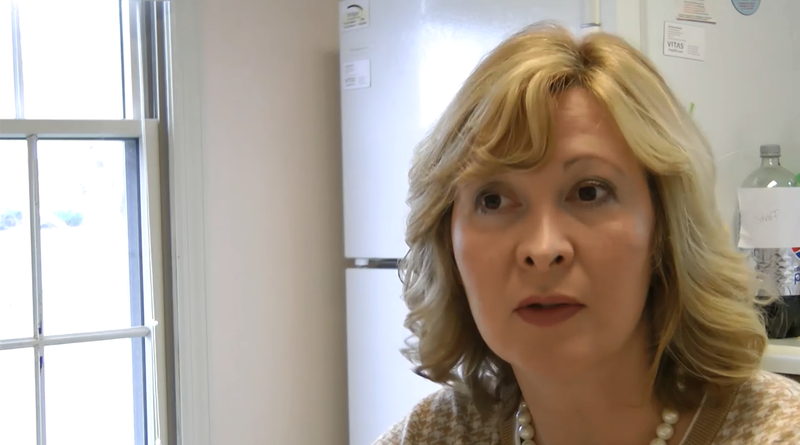 Melissa Jones talks about how she persuades doctors to change their opioid prescribing habits.

She drives 100 miles a day to visit doctors across western Pennsylvania’s Allegheny and Westmoreland counties, where prescription painkillers and their illicit cousin, heroin, killed more than 600 people last year. Bearing a smile, educational pamphlets and sometimes sandwiches, she is working to help doctors stick to new national prescribing guidelines, give them tips on how to handle patients demanding pills and remind them that opioids aren’t very good for chronic pain anyway.
“Most people trust their doctors,” said Jones’ boss, Cheryl Bartlett. “But we haven’t trained doctors about addiction, how to recognize it early and treat it in their practices. Why not help doctors better understand how to care for their patients?” 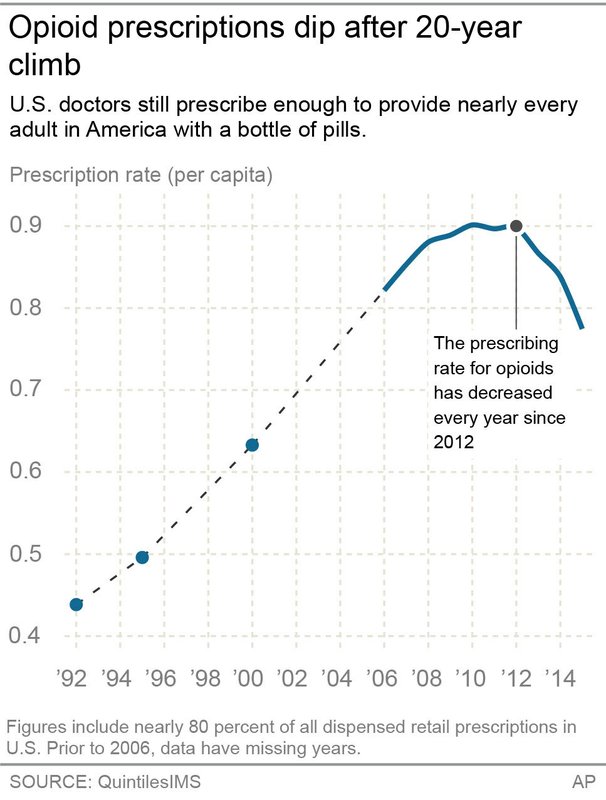 The rate of opioid prescribing has started to edge down in recent years, but it remains 56 percent higher than it was 20 years ago, enough to provide nearly every adult in America with a bottle of pills. The number of overdose deaths is still climbing, from pills that have been prescribed and from the surge of even more powerful opioids like fentanyl on the black market, where many turn for cheaper drugs after becoming addicted.
While narcotics can bring short-term pain relief and help patients with cancer and in end-of-life care, they’re often misprescribed.
Increasingly, the fight to save lives has put doctors in the crosshairs: They often feel they have no good choices to treat pain, and not enough time with patients who are already dependent on opioids.
Pennsylvania is among about a dozen states where people like Jones try to flip the script on drug marketing and push doctors toward change. Despite mounting evidence about the dangers of opioids — and their limited benefits for chronic pain — far less is known about what works to change doctors’ behavior.
“What’s taking so long to reverse this thing?” asked an exasperated Dr. Gary Franklin, a University of Washington researcher who, more than a decade ago, published a paper sounding the alarm about fatal overdoses in patients prescribed opioids. 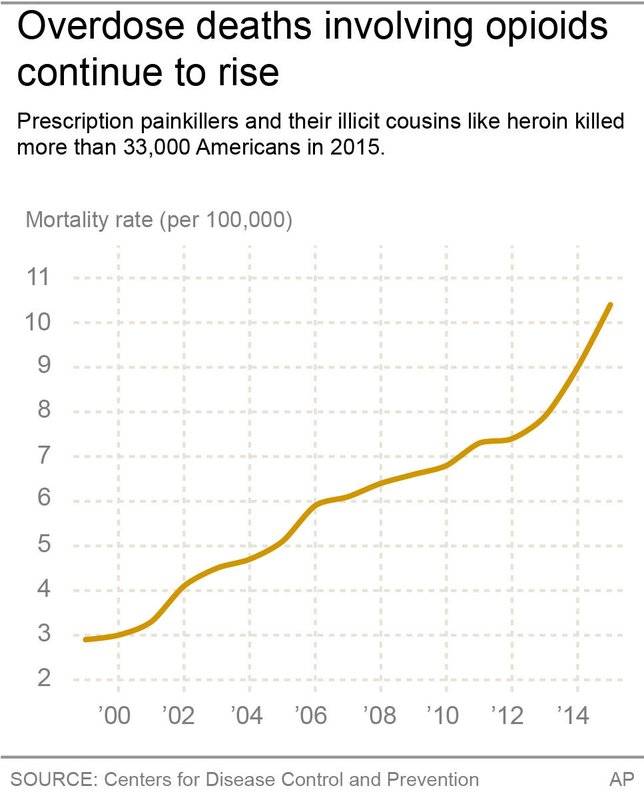 Across the U.S., lawmakers are restricting how doctors handle millions of quick encounters with patients in pain.
In Pennsylvania, where the opioid death rate is above the national average and rising, doctors now face sanctions if they fail to check a state-run database to flag those getting narcotics from multiple doctors. Massachusetts bars doctors from prescribing more than a seven-day supply to first-time opioid patients. Washington state won’t let doctors prescribe high doses without consulting a pain specialist. And an Illinois congressman wants all U.S. opioid prescribers to take classes every three years.
Jones uses a gentler approach. Her visits, funded by state lottery dollars, are voluntary and part of a program for low-income seniors run by the Boston-based nonprofit organization Alosa Health. Jones and her colleagues visit 2,600 Pennsylvania doctors a year to talk about opioids and other issues. 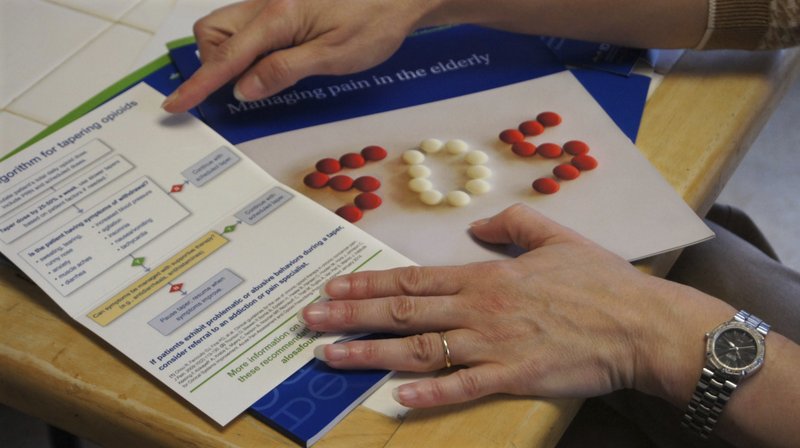 It used to be difficult for Dr. Dorothy Wilhelm, a geriatrics doctor in Monroeville outside of Pittsburgh, to get patients to agree to a urine screen to test for prescription medications and illicit drugs. Now, with new guidelines and pocket cards from Jones that help her explain the screens, patients don’t fight her anymore.
Evidence from New York City’s public health department and the Veterans Health Administration suggests Jones and others like her can reduce opioid prescribing, adapting a tried-and-true tactic from the pharmaceutical industry called detailing.
Drug companies send charismatic sales reps to visit doctors with free pens, lunches and pill samples, along with sometimes-skewed information.
In 2007, Purdue Pharma agreed to pay more than $600 million in fines for falsely informing its sales force that its opioid pill OxyContin had less potential for addiction and abuse than other painkillers. The marketing helped feed a 20-year trend of skyrocketing prescribing.
Jones, who has a nursing background, is fighting back with a charm offensive of science-backed facts.
“When I see her coming, I know I’m going to learn something and it’s fair,” said Dr. Rudy Antoncic, an internist in McKeesport.
Antoncic said he doesn’t have time to monitor patients for addiction, discuss overdose reversal drugs or follow other steps in new opioid-prescribing guidelines — so he refers patients to pain specialists instead.
“I’m forced to say, ‘Go to the pain clinic. Let those guys figure it out,’” he said.
Pain medicine emerged in the 1970s as a specialty. Many pain specialists prescribe responsibly, but others are notorious over-prescribers, handing out medicine to known addicts. Jones would rather see her doctors keep their patients and follow the guidelines.
Over sandwiches at a large medical practice in Monroeville recently, Jones quizzed two doctors about what’s slowing down change. Their answers boiled down to choices, time and money. 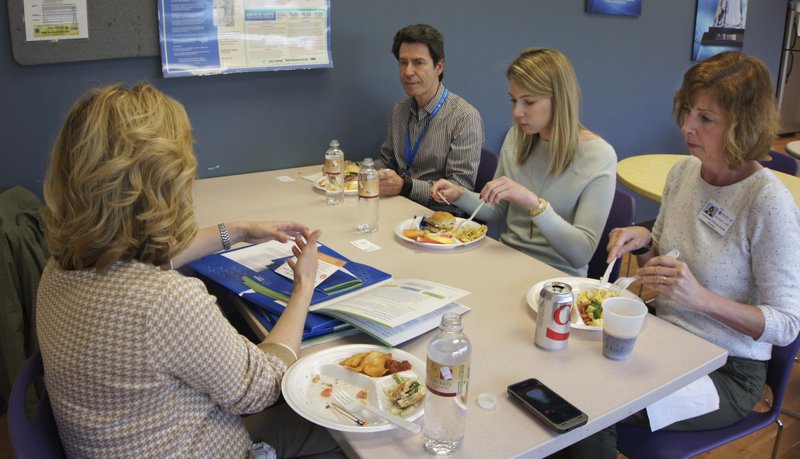 “The problem with treating pain is there are not a lot of options,” said Dr. Richard Rosenthal. “Tylenol can affect the liver. Anti-inflammatories can affect the heart, the liver, the kidneys. You’re not supposed to use muscle relaxants” with elderly patients.
Dr. Chaitali Sarkar said patients want pills for “instant gratification” and resist safer alternatives.
“We need more than 20 minutes to talk to patients,” Sarkar told Jones. “Everybody’s stretched thin.”
Jones reminds doctors that opioids’ side effects — besides addiction and death — include constipation and, in men, low testosterone.
Minimizing harm by getting off opioids can seem a dismal prospect to patients, unless a doctor offers other ways to cope with pain.
What about tai chi, massage or acupuncture? Jones asked, pointing to research in the educational materials she gave the doctors. Those usually aren’t covered by insurance so can be expensive for patients, Rosenthal said. Physical therapy might be covered, but co-pays add up.
Many chronic pain patients with valid opioid prescriptions become addicted — the best guess is about 1 in 10, according to an analysis of 38 studies.
For patients dependent on opioids, Jones makes sure doctors know how to taper them gradually to a lower dose. A pocket card she gives them suggests starting off by cutting the dose by a quarter or a half each week, which prompts scoffs from most doctors.
Cutting a dose in half “would not be well-received” by patients, Rosenthal said.
Start off slower, Jones nudged, reminding that using antihistamines or antidiarrheal drugs can help manage withdrawal symptoms.
Another big worry for doctors trying to limit opioids for patients: Some patients may seek pills from dealers on the street. 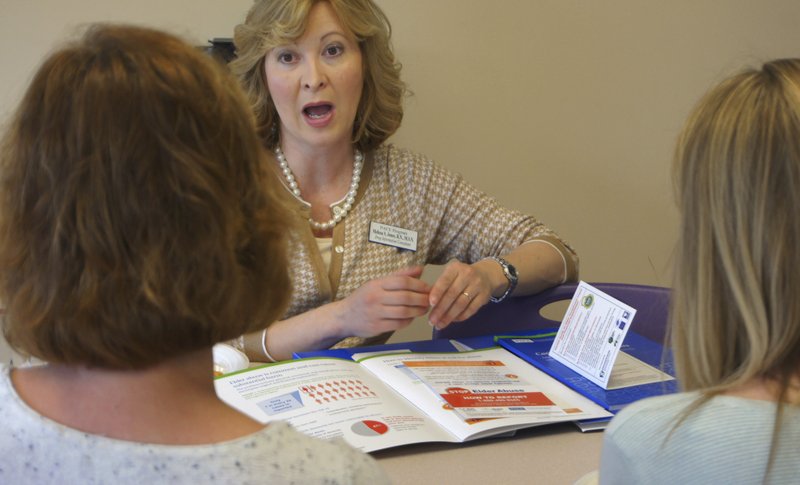 It’s been more than a year since the Centers for Disease Control and Prevention published the first national prescribing guidelines for opioids. The action was followed quickly by most state governors signing an unprecedented Compact to Fight Opioid Addiction.
The ultimate goal is fewer deaths, but it may take years.
Research suggests “it takes somewhere between 13 to 17 years for a new guideline to get fully implemented,” said University of Colorado researcher Robert Valuck, who coordinates his state’s response to the opioid crisis.
Among laws aimed at doctors, one of the more promising requires them to check a prescription drug-monitoring database to weed out patients with multiple doctors, pharmacies and prescriptions. Most states now have these databases. Pennsylvania is among the few requiring doctors to check it every time they prescribe an opioid.
One study found states requiring such checks, combined with restrictions on pain clinics, reduced opioid prescribing by 8 percent and prescription opioid overdose death rates by 12 percent, without increasing heroin overdose deaths.
Doctors tell Jones they love the new requirement because it keeps them from being fooled into feeding addiction. Some patients even say they don’t want to be tracked, so will stop taking opioids. If doctors can change their behavior and patients can change their expectations, there may be hope.
“We can’t wait 17 years,” Valuck said. “The cost to society is too great. We have to address this problem as aggressively as we can.”
___
Follow AP Medical Writer Carla K. Johnson on Twitter: @CarlaKJohnson