If you haven’t read one of this books you may have seen a movie made from his books  or you’ve just heard the name Walter Mosley. The first book in the Rawlins series, Devil in a Blue Dress, was written in 1990. That story is set in 1948, when Los Angeles was adjusting to an influx of  its new  population of black migrants from the South, who flocked there seeking greater opportunity at the urging of Chicago Defender Publisher Robert Abbott.
They made up the many who made up the ‘Great Migration’ who left the oppressive south  to work in war-related industries. Those experiences were vividly portrayed in that novel, which later became a movie starring Denzel Washington and Jennifer Beale.
Mosley’s love story mixed with, political corruption and racial intrigue became a best-seller. Former President Bill Clinton famously became one of his biggest fans. So it’s easy to see that his Easy Rawlins series is what made Walter Mosley famous.
He’s written 52 books, about 30 short stories and another 30 or 40 articles. Different than most  writers who specialize in one or two genres, Mosley describes himself as a ‘writer,‘ and refuses to be  forced into a box or categorized as a ‘mystery‘ writer or a romance writer. He has written mysteries, science fiction, erotica, young adult fiction, plays, opinion pieces and essays. He has even penned a slim book that instructs would-be fiction writers on how to get started.
Mosely has said, at a book signing I I attended  that,  “I have all these books and things to say in my head, I’m continually writing them. When  publishers say, ‘we can’t sell it or we don’t publish that.’ ”  I know that someone can.”
Mosely’s most recent book in the Rawlins series, Charcoal Joe, was released this summer. This is  the series that also awarded him honors.  He was chosen as the 2016 Grand Master of the Mystery Writers of America, its highest honor. The lifetime achievement award puts him in the company of past Grand Masters like John le Carré, Ross Macdonald and Agatha Christie. 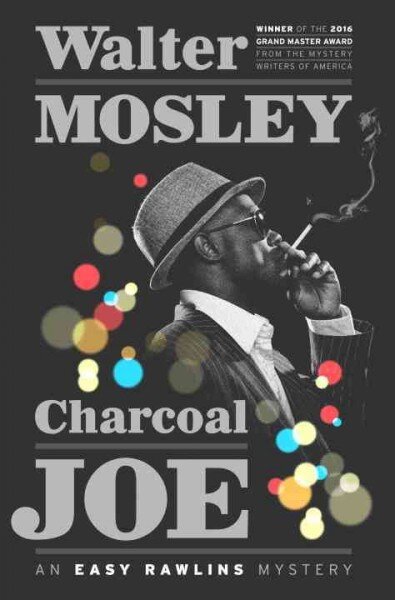 In the Easy novels, Mosely makes the  city equally as important as the people.  To Mosley the city characterizes the people because the environment influences how the people live, the opportunities available, the experiences they have.  Essentially where you live determines a  lot about who you become.  Because he was familiar with Los Angeles where he grew up it was important to him to write about the lives he saw around him. It was part passion, part mission: “One of the things that I understood was that you don’t exist unless you’re in the literature. And that doesn’t include the history books. And the black people in California, they just weren’t remembered. Nobody was telling their stories.”
Fortunately, growing up as a boy, Mosley listened to his father and his father’s friends men talk over backyard beers about politics, music and how to finesse the city’s notoriously racist police. These experiences  helped frame the Easy Rawlins novels revealing an inside view of LA’s organic Black community.
Mosely captures the organic evolution of a city of which the people are a factor effecting change revealed over a period of time from  ’48 to ’68. So captured through a lyrical lens  Los Angeles, is described in terms of race relations, racial culture, racial divisions, etc., which are  the essential moving parts  of what the Rawlins books track.
The novels move from the pre-civil rights era as Blacks were establishing themselves as the new urbane.  With that came new freedoms, opportunities and different thinking. Then they move to the late ’60s, when Easy has a steady day job but continues spend his time pursuing answers for those who can’t or won’t go to the police. That in and of itself is telling. By Little Scarlet, the ninth book, Easy has become a private eye, and the Watts rebellion has reduced his old neighborhood to abandoned buildings and ash. But after Blonde Faith, the 11th book, Mosley was stuck. The novel ended with Easy . .. ( you have to read it) .
Fans were devastated, but the way Mosley tells it he had no future for Easy so he stopped writing Easy’s story. He didn’t think of him as dead but something had to happen  that would shake his world up and give him new life. He needed inspiration.
Six years later after  leaving Easy idle he realized that he was mirroring the thinking of his father and his father’s side of the family, that some how the life  worth living had been lived and the rest was just going through the motions.  However he realized at that realization that he had a choice.
“So he chose to take a different view–to look through a different lens.
In 2013, Easy returns in Little Green, a story about a Black teen who disappears into a hippie commune after a bad acid trip. It was 1967. It was taken straight out of real life observation when, “Ten thousand hippies every night are marching barefoot down the street,” Mosely reminisces, “getting high, talking about new philosophies and religions and notions and trying to create a new culture … as they say, a counterculture.”
In Mosely’s  latest book, Charcoal Joe, Easy has settled into life-matured.  He’s still doing what he’s good at but he’s expanded as a co-owner of a detective agency, his two adopted children are doing well, and he has a fiancee — a beautiful flight attendant. Then he takes on a case that drawns him into the world of   gangster  Charcoal Joe who asks Easy for help. Of course, complications ensue.
The Easy Rawlin’s series is just like the character’s name, easy to be pulled into his compelling adventures and raw emotions experienced  as part growth, part ignorance, part courageous, part fearless.  So the reader finds Easy Rawlins attractive.
Mosley says the next Easy installment will probably focus on the aftermath of the Vietnam War. It shouldn’t be long. Mosley is quick — and prolific. “I only write three hours a day,” he says, “but I write three hours a day, every day, 365 days a year. I just write and write and write.”