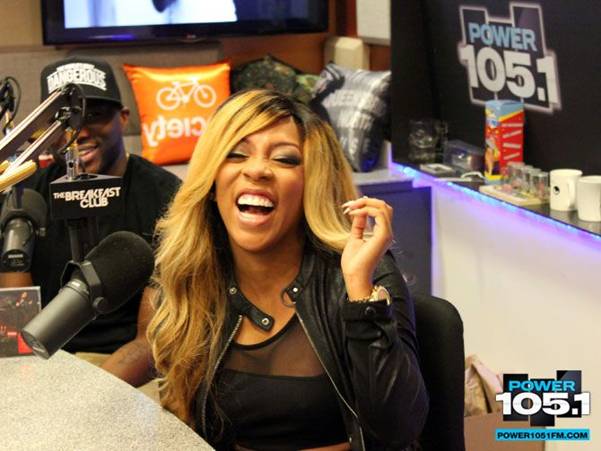 While trying to explain where their beef originated from, K. Michelle actually took another shot at fellow singer Tamar Braxton.
By now it’s clear that Tamar and K. Michelle don’t aren’t on direct speaking terms. Both singers haven’t addressed their feud this year but recently Tamar “tried it” when she accused K of sporting a wig like hers. K. Michelle took Tamar’s comments as another diss of her.
“Out of nowhere, Tamuppet attacked,” K.Michelle told Power 99 in Philadelphia, pointing out that she was promoting her album on “106 & Park” when Tamar sent the tweet. “I don’t have no problem, but I guess it’s very depressing to be a 40-year-old muppet still trying to shake and make it.”
She questioned, “It’s a wig. You’re 40 fighting over a wig?”
K.Michelle doesn’t get why Tamar still seems to have a problem with her after all this time, especially since she’s been trying to play nice.
“I wasn’t doing anything, I was working. I have actually even said good things, I like ‘Love and War.’ I like the record,” K.Michelle pointed out. “I’ve been saying really positive things about this woman, and she just can not take it. She can not take all of me and that’s really what it is.”
Apparently, the root of the beef comes from the first and only gig together. Tamar was moved from headliner to opening act status and K. Michelle was moved to her Tamar’s original spot. K. Michelle said the shift wasn’t personal and a decision from the show’s organizers, not her.

“We did a performance together and she was supposed to be the headliner, but I wound up being the headliner. That was a consensus of everybody,” K. Michelle claimed. ”You can’t necessarily be the headliner when you’re lip-synching the whole show. That is what it is.”
Read more at https://www.eurweb.com/2013/08/was-k-michelles-upstaging-tamar-braxton-the-root-of-their-ongoing-feud/#hAF1pVzO0Mc4gazy.99