Courtney Hamilton’s six sons and other family, (top from left rear) Camarian, in red hat, Kendall, Kristian, grandparents Betty Hamilton and Curtis Hamilton, Kingston, and their cousin Alex Hamilton, (bottom from left), Kobe, their cousin Kamarah Hamilton, and Kassius, had just finished their annual visit to the grave of their mother where they release six red balloons in her honor. Hamilton was killed in an automobile accident in 2018. Photo courtesy of the Hamilton family.

Black and Brown families have been disproportionately affected by the coronavirus pandemic. So have their children. According to the National Institutes of Health, tens of thousands of children have lost at least one parent or caregiver to COVID-19. Half of them are Black or Brown. This is one in a three-part series looking at how their lives have changed.

At first glance, they are just five rambunctious brothers doing what boys their ages do.

They like bouncing on their trampoline, riding their scooters, tossing around a football and playing video games. One is particularly fond of reading.

They are an especially tight-knit bunch.

There is Kingston, 10, the oldest, who their grandmother, Betty Hamilton, nicknamed “The Enforcer.” He makes sure the youngest get their baths and say their nightly prayers, she said.

“He’s like a little parent,” said Hamilton, 65, who retired on disability nine years ago after working 18 years at Pulaski State Prison, the women’s prison in Hawkinsville, Georgia.

Kristian, 9, has his own description for his brother.

“Sometimes he can be a bit bossy,” he said.

Kristian is the avid reader. He enjoys adventure books, drawing cartoons and is quickly moving to the next level on the Minecraft series.

“If the rest of them are outside, he’s somewhere inside with his nose in a book,” Hamilton said.

Kendall, 8, has autism and needs things to be just so, their grandmother said.

“He is very independent and wants to take his time figuring out things for himself,” she said. “He needs to do it on his own, in his own way, and he always gets it.”

Kobe, 5, is extremely smart, and he’ll let you know it, said his aunt, Carla Hamilton, 42, a registered nurse in Snellville, Georgia, 32 miles southeast of Atlanta by car. Their mother was her younger sister and only sibling.

“I had to tell him to stop calling people dumb!” she said.

And then there is the baby, Kassius, 4.

“I call him Cassius Clay,” his grandmother said, alluding the birth name of boxing icon Muhammad Ali. “He’s rough and tough. He’s always ready to fight and get his way.”

All five boys live with her in a three-bedroom house in Eastman, Georgia, with their grandmother and grandfather, Curtis Hamilton. Curtis Hamilton who holds the distinction of being the first Black National Guardsman in Eastman.

They have been reunited with brother and mother’s oldest child, Camarian, 14, who has been living there for the past three years.

Each is unique yet bound together by a common emotional scar. They share a pain and a deep fear left by COVID-19.

The signs are subtle, their grandmother said. For example, if one of them gets a cold or has the sniffles, they are quick to tell her, so she can immediately take preventive measure, or they will ask her for medicine, she said.

“They panic a little when anyone gets sick,” Hamilton said. “When their uncle got COVID, they were distraught. They thought COVID was a death sentence for everyone.”

It’s the reason Kingston asked his grandmother one day, “Did my dad get his shot? If he did, would he still be living?”

It was Aug. 8, 2021, when their father, Ken Williams, a manager for a fast food restaurant in Warner Robbins, Georgia, was diagnosed with COVID-19.

Their mother, Courtney Hamilton, had died three years earlier in an automobile accident in Perry, Georgia. She was 27.

“It was a huge shock for all of us,” Carla said of her death. “You always think you have to be strong for the kids, but really, they were so strong for us.”

The couple had never married. Their relationship, family members said, was off-and-on.

After their mother’s death, their grandmother and their Aunt Carla moved in temporarily to help take care of them.

They stayed together five months until the father moved out with the boys and continued to move, five times in three years, the family said. Sometimes the boys stayed with relatives, sometimes with his girlfriend.

Still, their father set the rules and the tone, the family said. He was their primary caregiver, but more than anything, he was their father, a man who was consistently in their lives.

The kids were living with Williams’ girlfriend when he was diagnosed. The children were quickly quarantined away from their father and kept out of school, though they didn’t know exactly why at the time, their grandmother said.

Williams entered the hospital Aug. 20 in Warner-Robbins. Three days later, he was dead. He was 37.

“They were devastated,” their grandmother said. “For the past three years, he was the sole provider for them.”

The next time the five saw their father was at his wake before his cremation. He was in a casket alongside another casket that held his 57-year-old father, Kenneth Williams, who had died a day earlier of unrelated causes.

With Williams’ death, his sons joined tens of thousands of children in the U.S. who have experienced the loss of one or both parents to the COVID-19. According to a new modeling study published in Pediatrics, a child loses a parent or guardian in one of every four COVID-19 deaths, a devastating consequence that is affecting the lives of an estimated 140,000 children.

After their father’s death, their grandmother and their aunt scurried to gather all the documents related to children – school, medical and birth records — and the boys moved into Carla Hamilton’s four-bedroom house with her five children in Snellville. 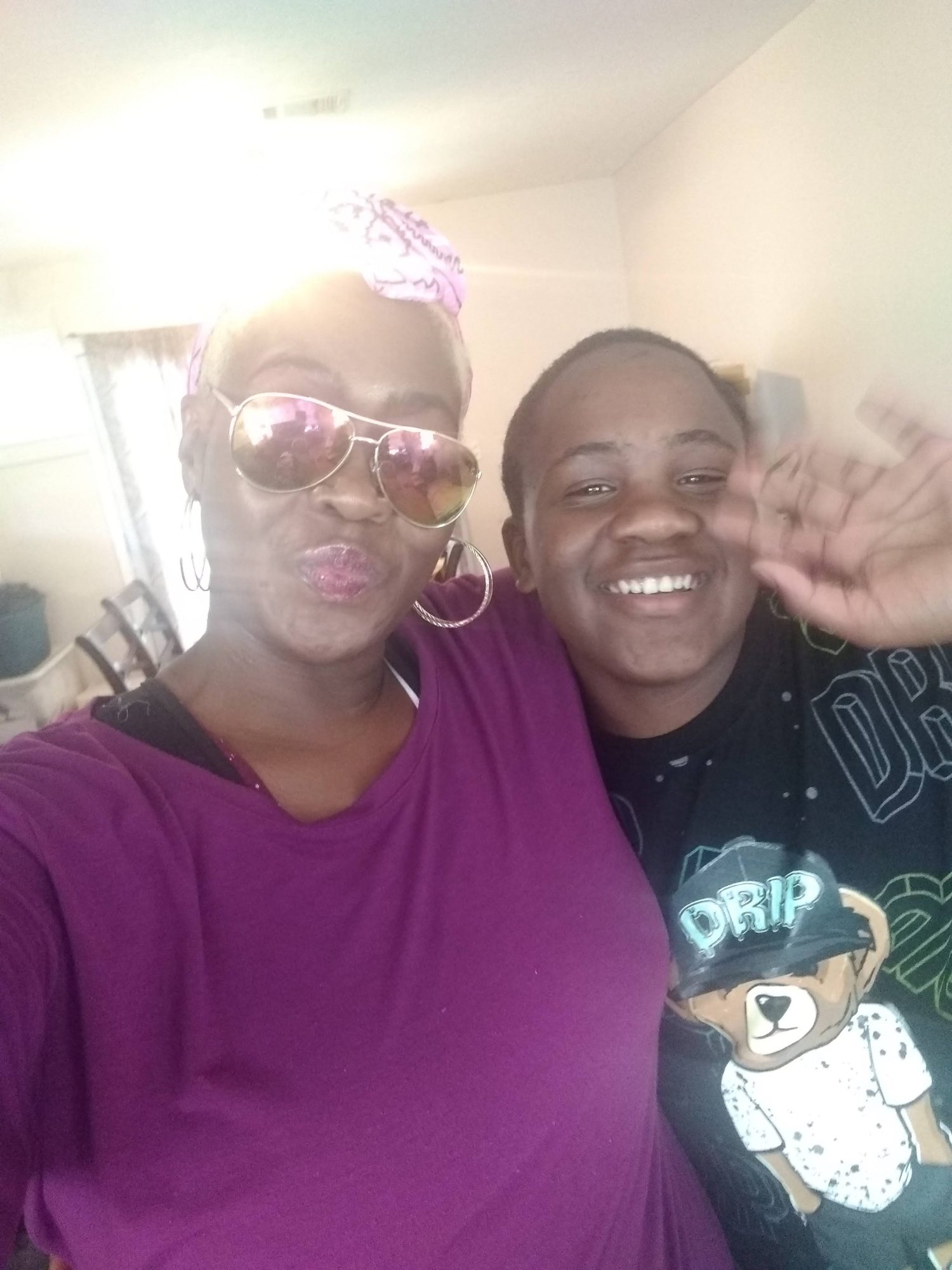 Kingston, 10, right, and his aunt, Carla Hamilton, have become even closer following the death of his mother, Hamilton’s younger sister and only sibling, in a car accident in 2018, and the death of his father from COVID-19 in August. Hamilton took in Kingston and his brother following their father’s death before they moved to live with their grandmother in Eastman, Georgia. Photo courtesy of the Hamilton family.

The property owner, however, said their presence was a violation of Hamilton’s lease. The children were forced to move again, this time with their grandmother, who had been keeping Camarian Hamilton, since his mother’s death.

Having responsibility for the care and feeding of five boys thrust upon them at the age most people retire would be considered a burden by many, but not the boys’ grandmother.

“I’m loving every minute of it,” Hamilton said. “Having all of them in the house really gives me a good purpose for living. I never realized how much I stayed in the house and did nothing but watch TV. But with them here, there’s something to do constantly.”

The boys seem to like it too, according to “The Enforcer.”

“I think it’s good [living with Granny],” Kingston said. “I like living down here. I like my new school. I like that most of my family lives here, and we get to see Cam and our cousins.

“I do my chores. I help my grandma and Pop Pop. I help with Kassius and Kobe. I just like being helpful.”

Their aunt said she has seen a change in the five.

Outwardly, the boys seem fine, Betty Hamilton said. She has noticed, however, they don’t talk much about their parents unless it’s among each other.

Their grandmother said, the boys put her on notice they want vaccinations as soon as possible.

“They want the shots,” she said. “They let me know that. They don’t have them yet, but as soon as I can find out where they can get them, I’ll get them.”

She has enrolled them in counseling.

“Everybody grieves differently,” she said. “This is the first week. The counselor will meet them on a one-on-one basis. I wanted them to be able to talk and not be scared something is going to happen to me.

“I want them to be kids and not have to worry about things like that.”

Every year on their mother’s birthday, the boys release six purple balloons—her favorite color—at her gravesite in Chauncey, Georgia, 15 miles from their home., their grandmother said. This year, a month after Williams’ passing the boys asked if they could get six red balloons in his honor and release them all together.

While chatting among themselves, Kingston said, “Well, my mom got a big old birthday present today!”

He was asked if he was talking about the balloons.

“No,” he said. “I’m talking about my dad. They’re together in heaven.”

Even on the days when the boys ask tough questions, like every time they hear anything on the news about COVID-19, or have the occasional nightmare, they appear to be at peace, their family said.

“All six of them are together again, and I think that’s how my daughter and Ken would have liked it,” their grandmother said. “I think they’re happy, because they know this is where they’ll be from now on.”