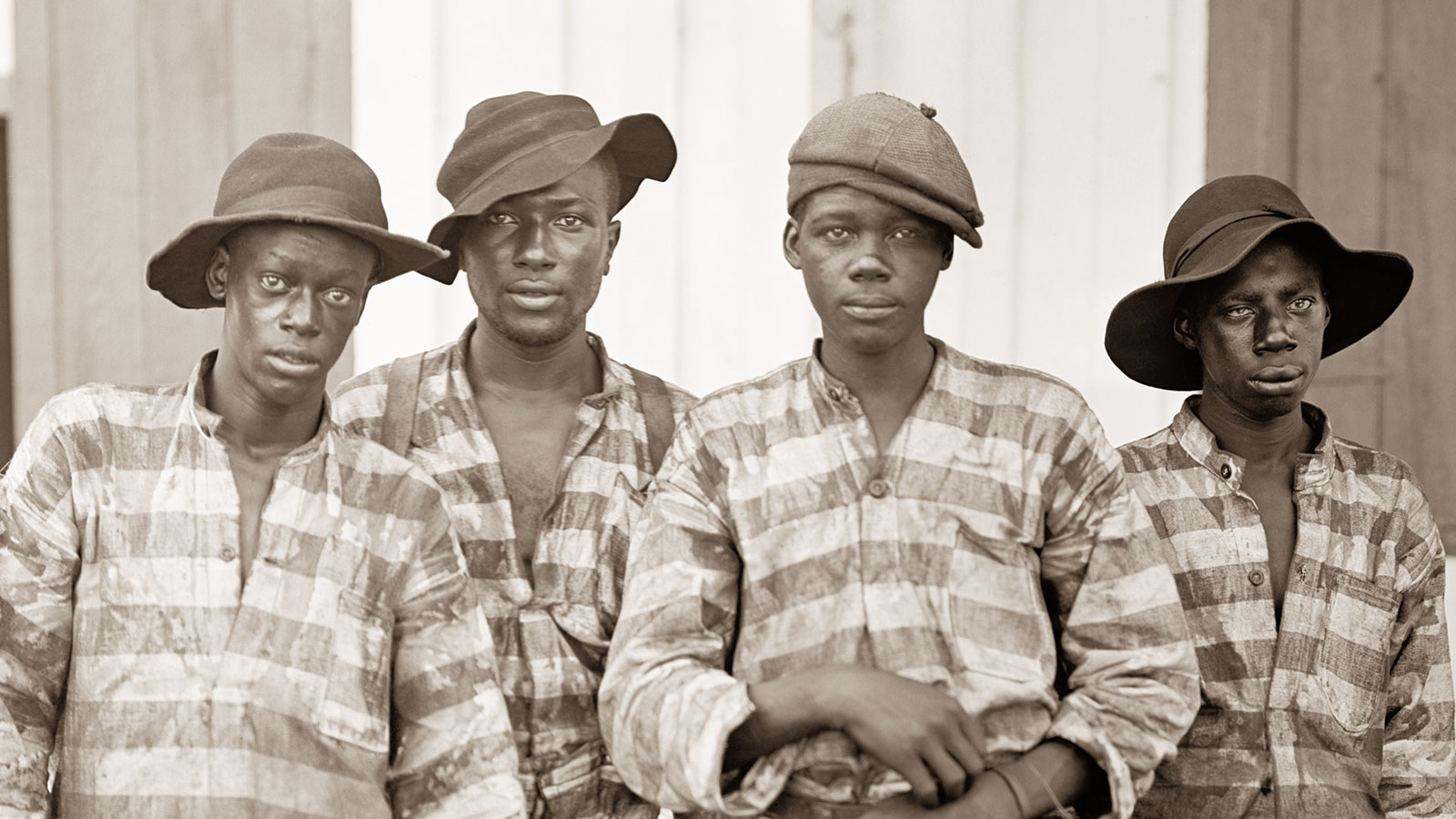 Mayor Andre Dickens hosted a signing ceremony for legislation for the City of Atlanta to acquire 75 acres of land – formerly the site of the Chattahoochee Brick Company- to develop parks, greenspace and Watershed land.

April 3, 2021, over the Easter Weekend, a broad-based coalition of community and interfaith, ecumenical faith leaders will gather at the Chattahoochee Brick Company at 1:00 PM to claim and declare the grounds a Sacred site to memorialize African Americans who died there working as forced labor. 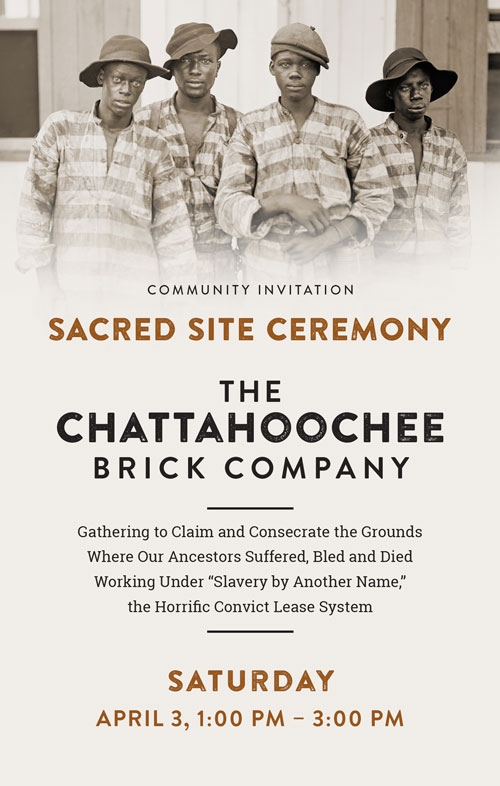 Douglas Blackmon, author of the awarding winning book Slavery by Another Name, has called the grounds of the Chattahoochee Brick Company a “death camp.” People of Atlanta and the nation are waking up to the horrific history of the ruthless and brutal use of African Americans as forced labor, utilizing the practice of the “Convict Lease” system employed throughout the southern states after Emancipation.  Under this practice, thousands upon thousands of formerly enslaved Blacks were criminalized for minor offenses like vagrancy, imprisoned and then “leased” out by prison wardens to private companies to be worked as free labor – hence the characterization of this and similar practices by Blackmon as “slavery by another name.”  Blackmon has agreed to participate in the Ceremony to share his reflections on the role of the Chattahoochee Brick Company in this dark chapter of American History. Famed Rapper Killer Mike, whose Grandfather worked at the Plant, has also been invited to speak at the Ceremony.

The convict lease system extracted enormous wealth from free Black Labor, filling the coffers of States and private companies in the South, including the Chattahoochee Brick Company – which generated so much wealth from this brutal system that it opened the 4th National Bank, which evolved into the Wachovia Bank and eventually Wells Fargo. Untold numbers of Blacks, many of whom were in their teens and early twenties were worked to death on the grounds of the Chattahoochee Brick Company, never receiving a proper burial. As more and more information is unearthed about the real legacy of a Company whose bricks were used to construct hundreds of building in the Atlanta metro area, there is growing outrage and demand that the property/the grounds be consecrated as a Sacred Site.

Though the issue has festered for years in the Atlanta Black community, the current wave of racial reckoning sweeping the city and the nation has galvanized the demand for justice as it relates to the sordid history of the Chattahoochee Brick Company. As a result, a diverse group of residents near the site, community leaders, opinion makers and faith leaders have come together to educate the public about the Chattahoochee Brick Company and call for justice.

Donna Stephens, who has been organizing residents around the issue for years, pulled together concerned leaders and organizations to form Descendants of the Chattahoochee Brick Company Coalition. Stopping construction on the site and declaring the grounds a sacred site emerged as the most urgent demands in a recent meeting. “I’m happy so many leaders and organizations are coming together to fight for justice in the memory of our ancestors whose remains are embedded in the soil where this terrible company is located,” she said, expressing excitement about the Sacred Site Ceremony.

Renowned WAOK Talk Show Host Derrick Boazman, who has championed the cause, said: “My objective has been to use my voice to stop construction on the site so that the land can be turned over to the city. We cannot allow this burial ground to be desecrated by business as usual. Our ancestors deserve better. I won’t rest until we get this done.” Boazman has recently held major press conferences on the site which have included community residents, elected officials and a number of prominent faith leaders. Boazman will be the Facilitator of the Program.

Pastor Timothy McDonald, Past President of the influential Concerned Black Clergy of Metro Atlanta, concurs with Boazman and community residents like Donna Stephens. During a recent press conference at the site he was filled with emotion: “When I came here today as a minister, as a pastor of 45 years, I felt it. I felt those spirits. I felt the ancestors.” Pastor McDonald has agreed to be the Master of Ceremony and Officiate the Consecration of the grounds along with Dr. Jamal Harrison Bryant, Pastor of New Birth Missionary Baptist Church. Speaking to the choice of the Easter Weekend to conduct the Ceremony, Dr. Bryant said, “The bones of our ancestors lie crushed into the grounds of this notorious factory. They never received a proper burial. But truth crushed to earth will rise again. On this holiest of weekends, we will gather to consecrate this ground and resurrect the memory of our ancestors so that they will never be forgotten again!”

Longtime Human Rights Activist Joe Beasley, who has been working closely with Derrick Boazman and Donna Stephens, vows to take action against all parties complicit in the brutal and immoral treatment of those forced to toil on the grounds of the Chattahoochee Brick Company: “Every financial institution and corporation in Atlanta that directly or indirectly profited from the inhumane theft of labor from our ancestors must be held accountable. They all have to contribute to making the grounds that are soaked with the blood of our people a fitting memorial,” he said.

The National African American Reparations Commission (NAARC) and the allied Fund for Reparations NOW! (FFRN!) are supporting the Ceremony and demand for justice. With the permission of the Descendants of the Chattahoochee Brick Company Coalition, NAARC/FFRN plan to rebroadcast the recording of the Ceremony and encourage national civil rights and human rights and reparatory justice organizations across the county to do likewise.

Dr. Joyce King, Professor at Georgia State University and a NAARC Commissioner, stressed the significance of the Ceremony and the community’s demand for justice: “The crimes committed by the Chattahoochee Brick Company in Atlanta illustrate the widespread use and abuse of convict lease labor throughout the south. We might vaguely recall images of chain gangs, but convict leasing was absolutely inhumane and far too few people know about what African American men, women and even teen-age “prisoners” actually endured at such “death camps”. The courageous work unfolding in Atlanta provides an opportunity to educate the local community, the nation and the world about the atrocities of the convict lease system.”

People planning to participate in the Sacred Grounds Ceremony will assemble at English Park and Recreation Center at 12:00 Noon and march to the site of the Chattahoochee Brick Company accompanied by an assembly of African Drummers which will include the Nzuri Youth Drummers, Djeibla Drum Ensemble and Giwayen Mata, an all-female drum group. The Ceremony will be conducted at 3195 Brick Plant Road.

The Egun Omode Performing Arts Collective, which is a dynamic children’s group, will perform a Cultural Prelude prior to the official start of the Ceremony. Veteran Events Producer Nii Badi is managing logistics and arrangements for this milestone Ceremony.

For further Information or to Arrange Interviews in the Atlanta Area Contact: Derrick Boazman 404.246.8001