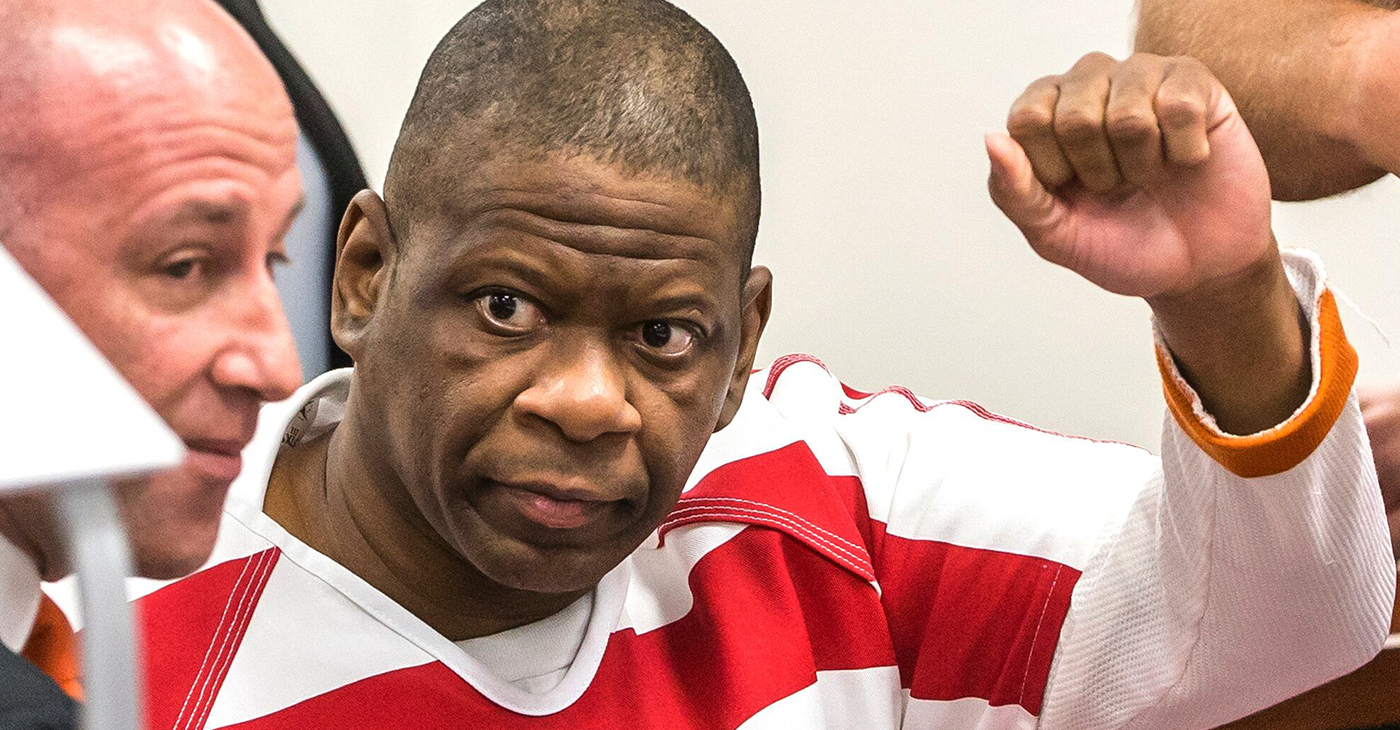 A crowd some of Rodney Reed’s family members estimated was about 1,000 people, recently gathered at the Governor’s Mansion in Austin, Texas demanding that Gov. Greg Abbott act to halt the execution of Mr. Reed in a controversial murder case.

In the past several months, there has been a groundswell of support for Mr. Reed, 51, who has been on death row for 20 years. In 1996, he was charged with and convicted of the rape and murder of 19-year-old Stacey Stites by an all-White jury.

Rodney Reed and his family have always maintained his innocence and his brother and family spokesman Roderick Reed said the family wants a stay of execution and a new trial.

Rodney Reed is scheduled for execution Nov. 20 when an appeals court stepped in November 15th to suspend his death sentence indefinitely. The decision also ordered the court where he was originally tried to consider new evidence in the case.

“All we want is a fair trial. That’s all we’re asking for,” Mr. Reed told The Final Call. “We want to be able to present witnesses and new evidence and clear his name … I believed he would have gotten off when he was on trial because we knew the truth. He and the rest of us as a family have always stood in that truth.”

Roderick Reed said he knew his brother and Ms. Stites had been in a relationship and had met Ms. Stites but because of the racial climate and the potential for backlash and retaliation, the couple had kept their relationship secret. Ms. Stites, at the time, was engaged to a police officer, Jimmy Fennell, who many believed was her killer.

The uncovering of new evidence, recent affidavits from witnesses that point to Mr. Fennell’s involvement in Ms. Stites’ death and enduring questions about details of the victim’s death necessitates a new trial, Mr. Reed’s supporters say.

Roderick Reed and his wife Wana recounted the isolation the family endured. The family approached local churches and civil rights organizations for help but was rebuffed, he said.

“The family had been turned down repeatedly by local clergy. The Nation of Islam was the only one present,” said Student Min. Robert L. Muhammad, who has been supporting the Reed family for about 17 years. “The family has been disappointed and dismayed but recently, we have seen a great outpouring of support recently that is very encouraging.”

“We were shunned by their people, shunned by Black press,” she recalled. “When the family first went out to Black churches, one pastor said, ‘I wouldn’t touch this with a 10-foot pole.’ ”

Both spoke of the Reed brothers — Robert, Ronald, Richard, Roderick, Ryan — being denied jobs because of their last names, and some older family members staying away from the family home for fear of being shot, ostracized or punished for their family ties.

Bastrop, Texas is 33 miles from Austin, the state capital and 85 miles from San Antonio. In 2017, the town had 8,802 residents. Min. Muhammad and the Reeds described a small Southern town steeped in racism, with the typical American racial hierarchy of Whites on top, Latinos in the middle and Blacks languishing at the bottom.

“Bastrop is racist but it’s lot different and deeper now,” Mrs. Reed said. “You don’t realize how deep it is because it’s almost second nature. It’s so deeply ingrained in people. But it’s not like how it used to be. We have Confederate monuments on the courthouse lawn. Things may be getting better but there is always a sense of looming White supremacy and the racial hierarchy.”

Min. Muhammad, who heads Muhammad Mosque No. 64 in Austin, agreed.

“Bastrop has a history of racism that existed there from the early 1900s to the ’70s and ’80s,” said Minister Muhammad, who was born and raised in nearby Austin, which is a considerably more liberal city.

Mr. Reed said he knew his brother was dating Ms. Stites although that wasn’t common knowledge. His brother, his sister-in-law said, got caught up in the narrative of a Black guy was in a relationship with a White woman in a Southern town.

Staff at The Innocence Project, which is handling Mr. Reed’s case, and the Reed family have raised a number of troubling questions and highlighted a series of discrepancies which they say all add up to Mr. Reed being an innocent man railroaded by the criminal justice system. It includes discrepancies about the time of Ms. Stites’ death as well as, the fact that the murder weapon, a belt, has never been tested for DNA evidence; and the state’s three forensic experts’ admission on the record to errors in their testimony, which led to Rodney Reed’s conviction and death sentence. They have submitted affidavits that the original time of death is inaccurate, charging the timeline for Mr. Reed killing Stites implausible.

Further, renown forensic pathologists including Dr. Michael Baden, Dr. Werner Spitz, Dr. LeRoy Riddick, M.D., and Dr. Cyril Wecht, have all concluded that Rodney Reed’s guilt is medically and scientifically impossible; Mr. Reed and Ms. Stites were having a consensual sexual relationship although at the time of the trial, no one came forward to corroborate their relationship. Today, new witnesses including Stites’s cousin and a co-worker, Alicia Slater, have corroborated Rodney Reed’s claim that they knew that Reed and Stites were romantically involved for months after the murder, and Jimmy Fennell was the prime suspect in the case. Mr. Fennell’s best friend at the time of the crime, Bastrop Sheriff’s Officer Curtis Davis, has now revealed that Mr. Fennell gave an inconsistent account of where he was on the night of the murder.

Two witnesses have come forward in recent weeks and submitted signed affidavits that add to the mounting evidence against Mr. Fennell. These affidavits include testimony from an insurance salesperson who stated that Mr. Fennell threatened to kill Ms. Stites while applying for life insurance. The second witness was a deputy in the Lee County Sheriff’s Office at the time of the murder, who alleges Mr. Fennell made an alarming and incriminating statement at Ms. Stites’s funeral regarding her body. Then there is an alleged a confession by Mr. Fennell that came to light Oct. 29. Mr. Fennell served 10 years and was released from prison in 2018 after being convicted of assaulting a woman who was in his custody as a police officer. Arthur Snow, a former member of the Aryan Brotherhood and prison mate of Mr. Fennell, disclosed a conversation in which Mr. Fennell allegedly confessed to murdering Stacey Stites stating, “I had to kill my nigg**-loving fiancée.”

The prosecution’s only forensic evidence linking Rodney Reed to the crime was semen taken from Ms. Stites’s body, which was attributed to the consensual relationship between them. The prosecution used this to connect him to the murder and refute a consensual romantic relationship, but some testimony has been recanted and discredits the state’s case, The Innocence Project said.

“We identify as death penalty abolitionists,” Mrs. Reed said. “Gov. (Greg) Abbott has been silent. He’s aware of Rodney’s case but has not made any statement, said nothing about it. He may be waiting for the (state) Supreme Court to act.”

Mrs. Reed said there are many holes in this case and substantial doubt.

“We want the state to give Rodney’s life back, show that he’s innocent,” she said. “The family wants them to stop the execution ASAP. Abbott can issue a stay and he has the power to direct this towards a new case.”

Rodney’s case has caught the attention of celebrities such as Oprah Winfrey, Kim Kardashian—who Mrs. Reed said has called, kept in touch and who is working behind the scenes along with rapper Meek Mill. Prison abolitionists, anti-death penalty advocates, ministers, priests and pastors have joined to lift their voices calling for Gov. Abbott to issue a stay of execution and order a new trial. Journalist and social justice activist Shaun King started a petition that had garnered more than 2 million signatures.

Then on Oct. 10-11, Dr. Phil McGraw explored the case on his television show to consider Mr. Reed’s claims of innocence.

“I don’t think it’s a question of whether he’s guilty or not guilty,” said Dr. Phil, who had an in-person interview with Mr. Reed, according to the Death Penalty Information Centre. “I think the question is, has he had a fair trial with a full airing of all of the evidence. And I think the answer to that question, in my opinion, is not just ‘no’ but ‘hell no.’”

The Innocence Project and Rodney Reed are seeking DNA testing of evidence that they say will exonerate him.

Mrs. Reed described the conditions under which her brother-in-law has lived for the past two decades.

“He’s incredibly strong. God has allowed me to see and witness true strength,” she said. “I went to visit him. He was upbeat. He is in a 6-foot square cell 23 hours a day, 7 days a week. He’s a big man in small space. He has pretty severe sensory deprivation. He’s not allowed to hug his mother, family or friends since all this time. But despite all that he’s pretty positive.”

She said Mr. Reed has no access to a computer, cell phone, or technology. He has supporters who reach out to him and that happens through his partner Judy Ann, who shares every day comments from his supporters and updates.

“He has family visits two hours a week. There’s a lot to get out because he’s trying to get everything out,” she said. “It can be a little tense sometimes. Rodney remains very strong and is being cautiously optimistic.”

Roderick Reed said his brother’s incarceration has been “a game-changer, life changing.”

“Dealing with this for this amount of time is a life changer. It has changed our lives. We’ll never be the same,” he said. “But every day knowing the truth and that Rodney’s innocent and this experience has brought me to a whole other place in my mind.”

“I’m very optimistic. He will be exonerated. We will have time to heal,” he concluded.