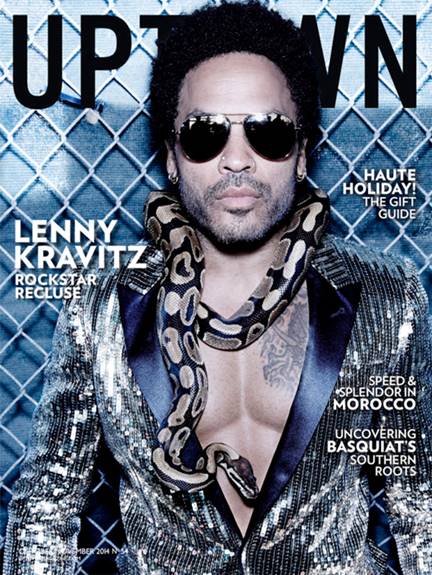 For many women, Lenny Kravitz is the man with good looks to go with a long-running music career.
Chatting with Uptown magazine, the guitarist graces the cover of the publication’s Oct/Nov issue while discussing getting married again, having more children and his future, among other things. Kravitz’s interview comes amid the release of his latest album, “Strut.”
Highlights from the interview are below:
On having more children, and what his daughter 25-year-old Zoë Kravitz offered:
“I would like to do it again. That’s the way I feel, but when I bring it up [Zoë’s] like, ‘Slow down. Slow down. I can have kids. Slow down.’ So I don’t know if she’s too keen on it.”
On getting married again after dating starlets and supermodels:
“I’m waiting. It’s coming. It isn’t a far-off thing anymore.”
On his love of fashion, specifically Saint Laurent:
“What I like are clothes that are classic rock and roll. Saint Laurent has that retro inspiration but its cleaned up and made into modern fashion. Their clothes fit my silhouette. They’re clothes that feel like me.”
Reflecting on the deaths of his mom and dad:
“I thank God every day for my health. [Health], for me, is where it begins and the rest is gravy. Also [I’m thankful] for being disciplined. As they say in the Bahamas, there are a lot of talented people living under the bridge. A lot of folks driving cabs, fishing and working in the streets can act and sing better than people getting Oscars and Grammys.”
On his future:
“I feel like whatever I’m supposed to do or get or achieve will happen, and what’s not mine is not mine to have. My grandfather used to tell me when I was a kid, ‘Nobody can take anything away from you that is yours.’ He also used to say, ‘the best is yet to come.’”
Read more at https://www.eurweb.com/2014/10/lenny-kravitz-on-having-more-kids-parents-deaths-and-his-future/#FtfpSvePf72FdvoA.99