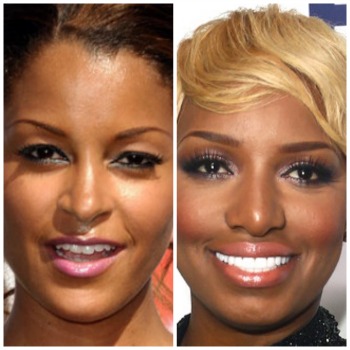 Claudia Jordan is the newest addition to  “The Real Housewives of Atlanta,” and she’s already going at it with the the head housewife, NeNe Leakes.
Jordan replaced Porsha Williams as a full-time housewife with the rest of the cast, and she’s already stirring up trouble — becoming friends with Leakes’ enemies Kenya Moore and Cynthia Bailey.
Jordan initially was supposed to be a recurring “friend” of the housewives with singer-actress Demetria McKinney, but her feuding with Leakes helped bump her up to series regular, allegedly.
“Claudia kept trying to start an argument with NeNe to get attention,” an insider told MailOnline. “After a few subtle digs, NeNe let into her; claiming that Claudia has a reputation for sleeping with lots of men in Hollywood  and wearing “cheap” clothes.”
The sourced added, “Nene called Claudia  a “pretender” who was desperately trying to get a job on the show and living living in Kenya’s shadow.”
But it turns out Moore is allegedly upset about how much screen time the producers of “RHOA” have been giving Jordan instead of her — when she’s the one who got her on the show.

“Kenya has made it clear that Claudia is her friend and she is responsible for getting her on the show,” she said. “She griped to the executive producer that they were spending a lot of time focusing on Claudia and she didn’t appreciate that.”
Read more at https://www.eurweb.com/2014/10/uh-oh-nene-leakes-has-new-rhoa-enemy-claudia-jordan/#KcylFQWj07tsiSPs.99