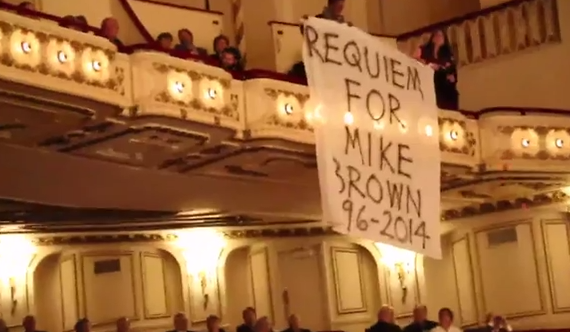 Peaceful demonstrators aren’t letting folks in the local St. Louis area forget who Michael Brown is and the national movement that occurred during the aftermath of his death.
The mixed group interrupted the St. Louis Symphony  and made sure St. Louis’ upper crust got the message – protesting to the tune of Brahms Requiem called “Requiem for Mike Brown.”
The group of approximately 50 protesters stood to their feet in the audience and chanted the lyrics for peace and equality.“Justice for Mike Brown is Justice for us all/Which side are you on friend? Which side are you on,” the mixed group sang.
As the group chanted the lyrics, banners were dropped — reading “Requiem for Mike Brown,” “Racism lives here” and “Rise up and join the movement.”
As the protest was coming to a close, the group peacefully started to leave the hall as they chanted “black lives matter.”
“It is my duty and desire to try to reach out and raise that awareness peacefully but also to disrupt the blind state of white St. Louis, particularly among the people who are secure in their blindness,” organizer Sarah Griesbach told the St. Louis American.
[ione_embed src=//www.youtube.com/embed/T_7ErkQFduQ service=youtube width=560 height=315 type=iframe]